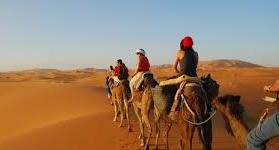 We will meet you at the airport and travel into the city with the first views of the Moroccan countryside. We will visit Hassan II mosque (not possible on Fridays or religious holidays), the largest mosque in Africa and decorated with beautiful tiling of the utmost craftsmanship, and continuation to the capital city, Rabat, the night will be spent in a riad. 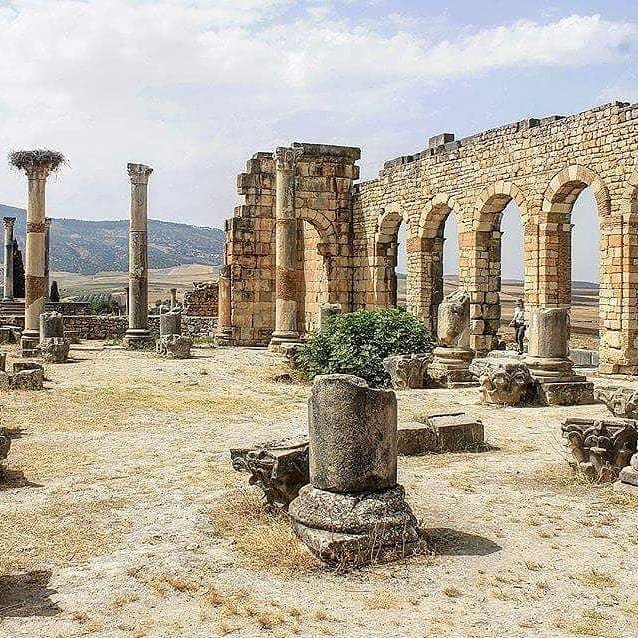 After breakfast in the riad, we will go back again over the river to Rabat, where a visit to the Hassan Tower and the Mausoleum of Mohammed V, built in homage to the king who passed away in 1961 is scheduled. His son and successor, Hassan II, who died in 1999, is also entombed here. keeping on to the Kasbah Oudaya gardens, which are Andalusian in style, and from there into the Kasbah itself, painted the traditional blue and white on the outsides of the walls. This style of decorating houses can be found in many seaside towns up and down the Atlantic coast. The tour goes on to Meknes, where you will visit Bab Mansour, one of the most famous sites of Morocco, the Moulay Ismail mausoleum and the granaries. The night will be spent in a riad at Meknes.

After breakfast at the riad, we will depart to Volubilis to visit the Roman ruins, which are spread over a wide area and afford beautiful views over the valley and hills. From here you can see and then visit the holy city of Moulay Idriss. Non-Moslems are not allowed entry into the mausoleum but the main square has lovely views and lovely little shops. and continue to Fes for dinner and overnight in a riad. 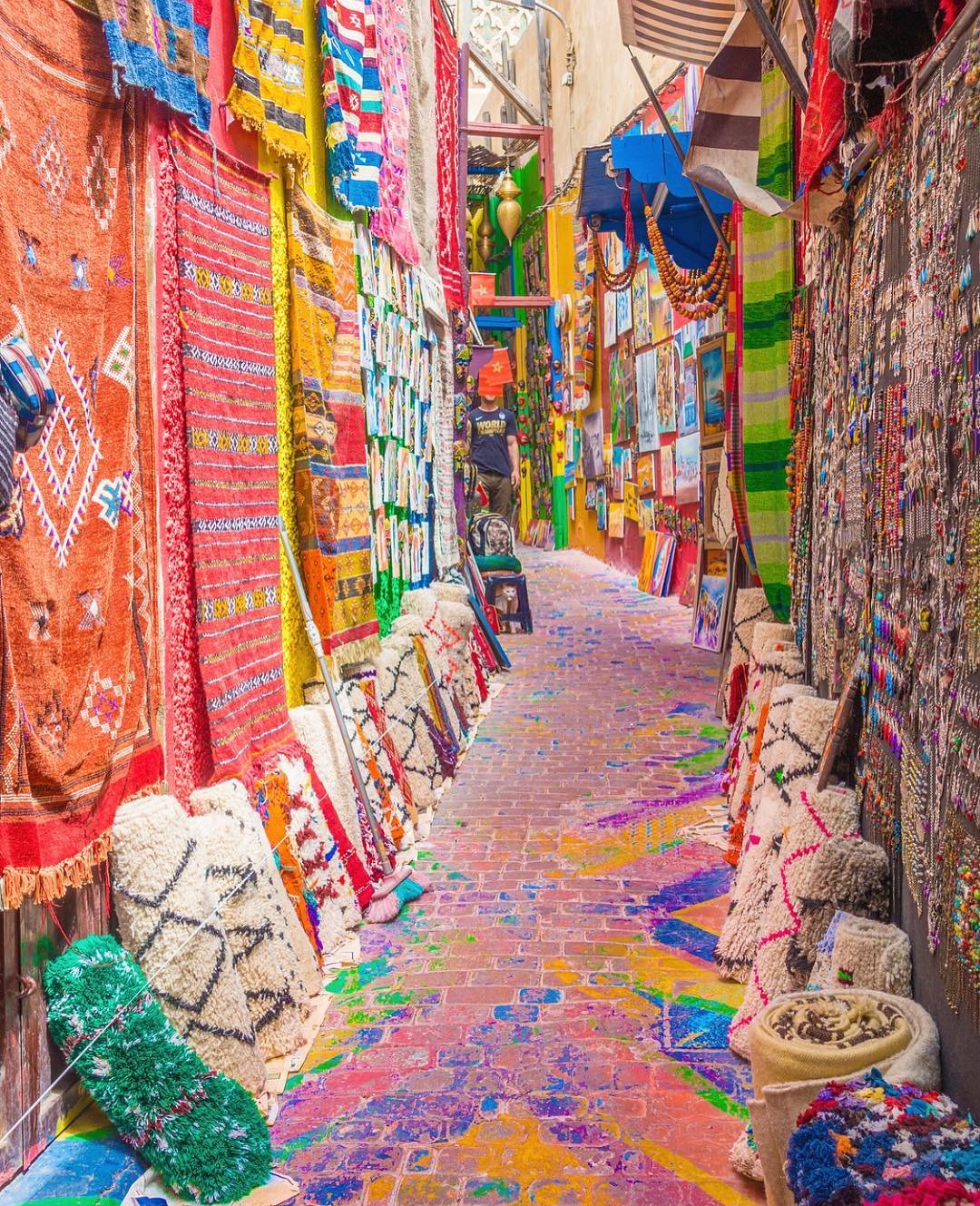 Enjoy a full day sightseeing tour in Fes which is the oldest of Morocco’s four Imperial Cities. The medieval city of Fes El Bali, or “Old medina Fes” remains complete and is unspoiled. During your tour of this part of the town, you can visit the exotic Bou Inania Medersa), the Medina and the Kairaouine Mosque, where you may take pictures of the wonderful courtyard from the main gate as well as the famous souks. In the afternoon you can visit Fes El Jdid, or “New Fes” and the Museum of Moroccan Arts. The night will be at the riad.

Leaving Fes at 8:00 o’clock, travelling via Azrou, where you can see Barbary apes in the forest of the Middle Atlas. Lunch will be in Midelt, (the apple capital), at the foot of the Ayachi Mountain. We will continue over the Tizi-n-Talremt pass and through the Ziz Valley, which is particularly well-known for its palm trees and the length of the oasis. All along the road there are innumerable “ksars”, small villages of individual houses. From here we will reach Er Rachidia and then Erfoud, famous for its Dates festival and fossils. The night will be spent in a traditionally built hotel. 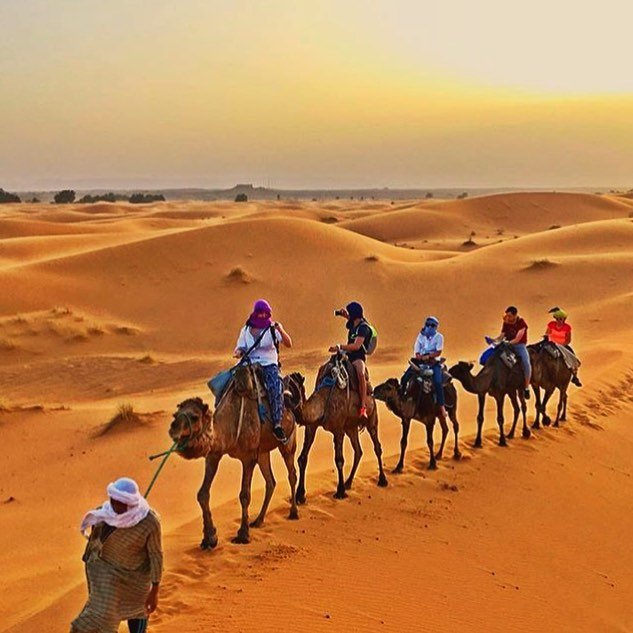 In the morning after breakfast, you will continue to Rissani to visit the souks there. From here you will take the 4×4 to the lake and then visit Berber nomads for some music. Lunch is at the Erg Chebbi dunes in Merzouga at an auberge with a swimming pool, near the dunes. Once at the bivouac, you will take a camel ride to see the sunset from the top of the dunes. Back at the bivouac, dinner is served, followed by an evening of music and the night in a nomadic tent.

If you wake up early enough, you can watch the spectacle of the sunrise, when the colour of the dunes and the play of shadows are an awesome sight. After breakfast you can walk in the dunes before leaving for Tinghir and the Toudgha gorges for lunch. The road passes through Tinjdad and the Toudgha Valley. Here there are a lot of opportunities to walk, such as along the river through the gardens or up the road on the other side of the gorges. Later the itinerary continues to the Dades Valley and the Dades Gorges to spend the night in a hotel.

After breakfast a walk in the Dades Gorges is scheduled. Back at the car, the tour to Ouarzazate continues, going off-road along the Boutarar route to visit Berber nomads in their caves and partake of a glass of tea with them. From here we will continue through the Valley of the Roses, famous for its Rose Festival in May, and pass the kasbahs of Skoura. In Ouarzazate you will stay in a riad.

After breakfast, the road goes on to Kasbah Ait Ben Haddou, a World Heritage site and the backdrop for many Hollywood blockbusters. It is the most famous Kasbah in Morocco. From there the road continues to Telouet, along the new asphalted road. This kasbah is set right in the amid of the mountains and was once the seat of the last Pasha of Marrakesh, El Glaoui, from where the highest pass in Africa, Tizi-n-Tichka was controlled. At the end of the afternoon we will reach in Marrakesh.